Government says it has plans to improve the railway system in the country through recapitalisation. Transport and Logistics Minister, Frank Tayali is happy to note that Zambia Railways has managed to stay afloat with little or no investment in the railway infrastructure and equipment, hence the need for Government to address the recapitalisation of the railway firm.

“ As Government  we are alive to the fact that the railway system in the country needs urgent attention for it to contribute meaningfully to the development of the country. It is gratifying to note that Zambia Railways is still operational despite the numerous infrastructure challenges that the company is grappling with” said Mr Tayali.

Mr Tayali said the investment package for Zambia Railways will address the railway infrastructure and rolling stock needs as well as safety issues.

Speaking during the familiarisation tour in Lusaka recently, Mr Tayali revealed that Government through his Ministry has received overwhelming interest from private players that would want to invest in the railway sub-sector.

And the Transport Minister has pledged to work with Zambia Railways to find a lasting solution to encroachment on railway land.

In his Presentation, Zambia Railways Limited Chief Executive Officer Christopher Musonda said the company needs capital injection in the quickest time possible if it has to play its role to support the desired and envisaged economic development of the country.

“The current infrastructure and rolling stock has run down due to age and deferred maintenance. As a result, ZRL in conjunction with the Industrial Development Corporation and the Ministry of Transport has been discussing with possible financiers to secure financing for recapitalization.  ” Mr. Musonda disclosed.

Mr Musonda said the company plays a significant role in the economic development of the country and the region at large.
He further noted that the railway system in Zambia integrates the region by breaking national borders through movement of cargo as well as facilitating regional trade.
“The railway system is an enabler of industrialisation as it guarantees delivery of inputs for production and transportation of output to its destination through bulk cargo movement. Bulky cargo movement is an attribute of railways” said Mr Musonda.
The Transport Minister later toured the railway line between Lusaka Station and Ngwerere to appreciate the encroachment levels on Zambia Railways land. 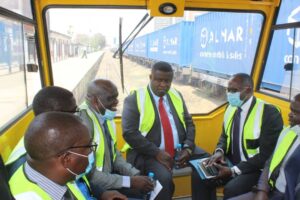 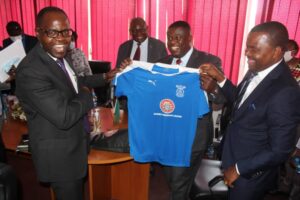